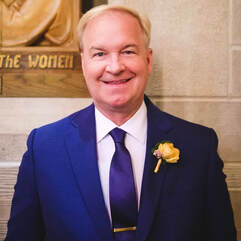 The Brothers of Sigma Chi wish to convey to Carl's family our deepest sympathies on their passing.
Paul, a patent attorney and resident of Fairfax Station, VA, died unexpectedly at the age of 62 in his home.

Hel is survived by his parents, Sally and Fred Neils; his wife, Peggy Neils; his children, Colin and Drew; his daughter-in-law, Jackie Neils; his granddaughter Vivian Neils and his future grandson; his brothers Tom Neils (Stephanie) and Eric Neils (Pauline).
Paul was a very religious man, he attended Grace Evangelical Lutheran Church and was an active parishioner in the Church. Every night before Colin and Drew would fall asleep growing up, Paul would go into their bedrooms and say their Prayers and kiss them goodnight. He will be deeply missed by his family, friends, and all who knew him.
​
ALL HONOR TO HIS NAME.